I have been constantly working to improve LinuxJobs.fr, a job board for Free and Open Source Software Professionals in France, since the last report published in the end of 2017 (in french). What are the major news about LinuxJobs.fr for the first 4 months in 2018? Here is the LinuxJobs.fr 2018 1st Quartely Report. 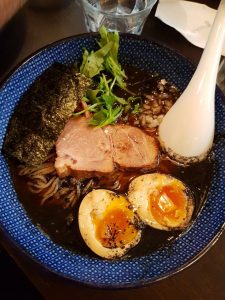 Ramen from Kodawari Ramen, one of the best ramen restaurants in Paris, France.

We reached the Ramen Profitability for the first time in March with a revenue greater than 1000€ (euros). It could have been a (happy) accident. But we also reached ramen profitability in April! Two times in a row, that’s not an accident any more, it’s a trend!

I hope it’s going to continue and increase in May and June, but in France the recruitment abruptly slows down  at the end of June until the last week of August, because of the long summer holidays.

After a slow start in January, the Monthly Recurring Revenue (MRR) quietly grew and rose to (almost) 700€.

My goal for this year is to reach a MRR of 1000€. It’s going to be difficult to maintain a good MRR during June, July and August, but it should be much easier starting from September.

The price of posting a job offer was raised from 57,5€ to 65,85€ (excluding VAT) for one job offer. We started paying to post job offers in February 2017 at a really low price and we revised it several time in order to provide an exceptional service to our customers and reach profitability. The price is still pretty low compared to other players in the field.

Number of posted job offers for the 1st quarter of 2018

The number of job offers posted on LinuxJobs.fr reached a peak in March (25), before decreasing in April.

Nevertheless, these numbers are quite good compared to 2017, especially if you think that lots of recruiters in 2017 could still post free job offers, during the transition to the new business-model. 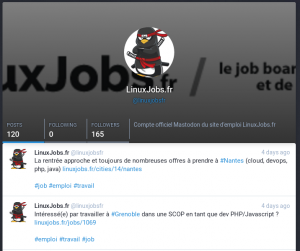 And that’s a great news, because this social network perfectly fits the ideology of Free Software. Nevertheless the Diaspora* account did not grow significantly since 2017.

The second quarter is always the most difficult one because of the long summer holidays. But I’m expecting a steep growth in the last quarter of 2018. I also intend keeping growing the social networks, especially Twitter and Mastdon. Social networks are the primary sources of job offer views on LinuxJobs.fr.

The second major goal is to start to replicate LinuxJobs in other countries. Stay tuned!