My side project, LinuxJobs.fr, the job board for the Free and Open Source Software Professionals in France, made 4863€ in 2017. It just reached 9813€, turning to a financially much more interesting side project this year.

Revenues by month in euros in 2018 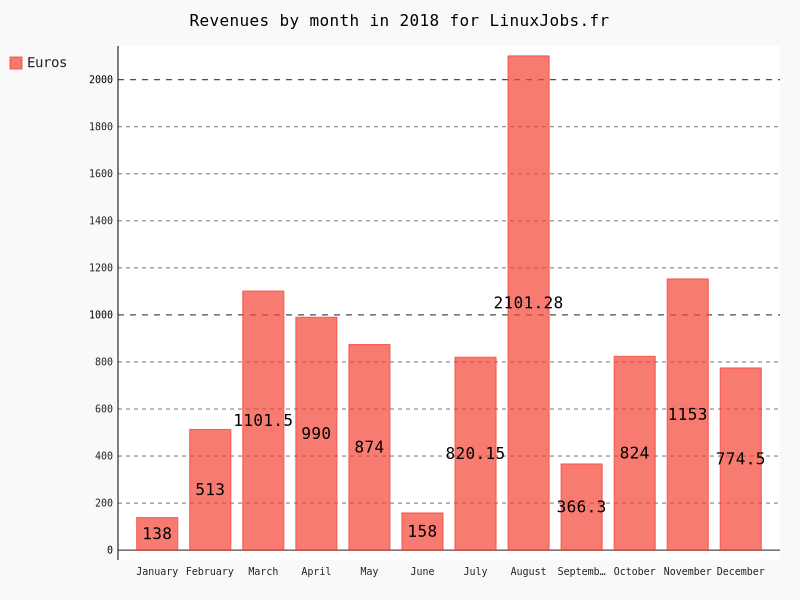 As you can read, revenues have ups and downs. The Monthly Recurring Revenue in 2018 is 817€.

I was quite confident about the second semester sales, especially the last 3 months september, november and december, but the sales were not quite the ones expected. Anyway, the important factor is of course that the revenues increase on the long term.

The price to post a job offer was increased in 2018. It’s still pretty low compared to the market price.

What I learned this year: based on the sales of 2017, I thought it was going to follow the same trend this year, selling nothing during July and August and strong months at the end of the year. But this trend was not followed by the sales of linuxjobs.fr in 2018. So it means sales are not related to the time of the year. So working to make linuxjobs.fr more visible should be a constant work. 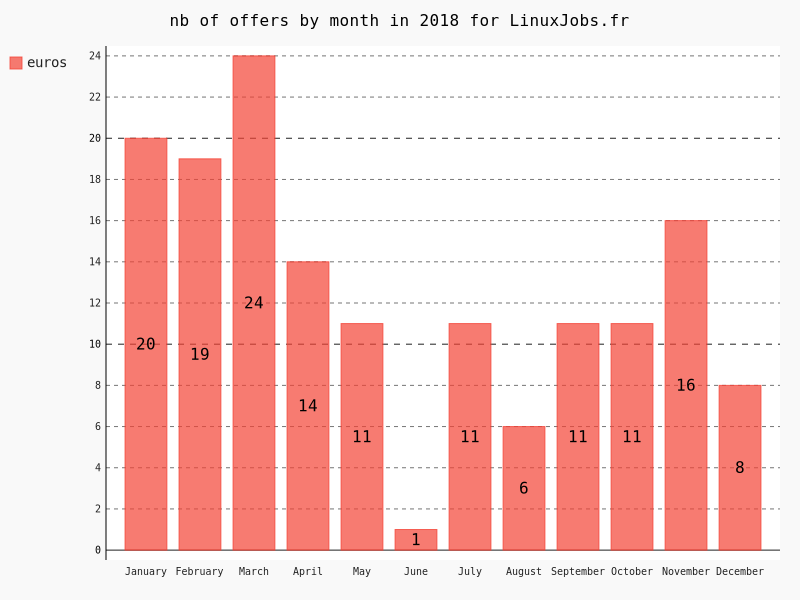 What I should have done before: without job offers, users won’t come on your job boards. But you won’t go anywhere with fake or job offers of poor quality. Moreover lots of potential customers won’t consider your service serious if you don’t charge. I should have charged earlier, maybe 4 or 6 months before. Even one year after, people still ask me if it’s possible to post free of charge because they know it was free of charge once.

Unexpectedly, the website drives a good traffic, around 1000 unique visitors a day, and increase whenever as a new job offer is posted. Until this year I dedicated most of my time to develop and set up tools for social networks. No special SEO effort was pursued. Given the fact that the average visitor on LinuxJobs.fr is quite techy, the RSS feeds are quite followed.

Goal for 2019: I should have a good look at the SEO of LinuxJobs.fr in order to be more efficient while requested by search engines.

LinuxJobs.fr broadcasts the job offers on 3 different social networks, Mastodon, Twitter and Diaspora*. The number of followers mostly evolved on Mastodon and Twitter in 2018. 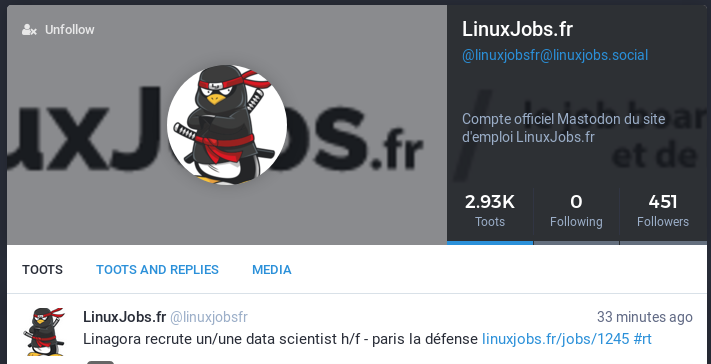 The different Mastodon accounts of LinuxJobs.fr reached 900+ subscribers this year. The main account relaying every job offers, but you also have dedicated accounts, like the devops one, or the sysadmin one.

Goal for 2019: increasing the number of subcribers to the different social networks allows a growing number of users. But the growth needs to be organic because only qualified subscribers will ensure your job offers reach the good audience.

As I wrote in this article, I’ll need to dig in the SEO of the website this year. I’m pretty sure a wider audience could be reached and I’ll try to reach it in 2019. I’ll also intensify my effort on increasing the number of subscribers on the social networks.

Financially it was really exciting to watch the revenues of this side project grow this year but also really frustrating when you know it could grow more. Of course reaching a wider audience takes time and/or money. I’m exploring and, as another goal this year, I’ll explore different ways to grow the audience. The main goal will be to double again the revenues in 2019. How could it be motivating if it was not ambitious 😉

Carl Chenet, Free Software Indie Hacker, Founder of LinuxJobs.io, a Job board dedicated to Free and Open Source Jobs in the US (soon to be released).